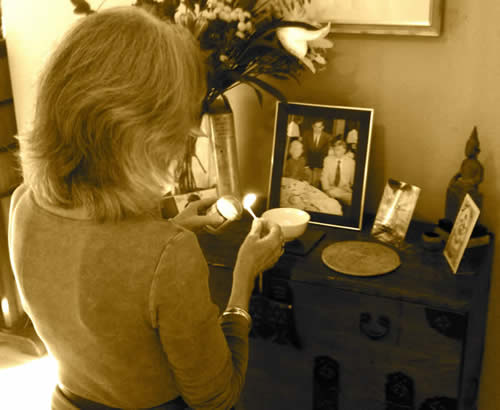 On September 10th, a day before many of us stop and remember a larger, more disorienting sorrow, I have borrowed from Jewish ritual and lit a candle to mark the second anniversary of my mother’s small, brave and noble death.

Her name was Valerie Joy de la Harpe Butler.  She was born in 1924 in a small South African town. She died 84 years later in Middletown, Connecticut, suffering from congestive heart failure, on the hospice unit of a community hospital.

I bought the candle for her at Safeway, in the kosher foods section. It’s called a “Yahrtzeit” — a word formed from the Yiddish word for anniversary. Enclosed in glass like a votive, it will burn for 24 hours before it flickers out. Burning a Yahrtzeit candle is a community ritual, and because of that I am not alone, and don’t feel alone.

It will shine on a wooden table in our entry way,next to a vase of flowers, her photo, and a wooden Buddha, probably from Thailand, that I bought years ago (with Christmas money my mother had given me) at the Sausalito Flea Market.”How but in custom and in ceremony are innocence and beauty born?” asked the Irish poet William Butler Yeats. How, in a fragmented and secular America, do I give dignity and grace to the memory of a woman who meant much to me, but whom few of my California friends ever met? How will we all honor the memories and suffering of two thousand people who died suddenly and horrifically, people whom we did not know?

We must improvise and write our own scripts for mourning, the way people now do for their weddings on Mount Tam.

Once upon a time, when people were more likely to be born and to die in the same town, each death was a public event, its rituals prescribed. In medieval England and Europe up until the 19th century, the church bell — a real one — tolled for each one. For decades after the carnage of World War I, British people in villages, towns and cities lined up once a year on the streets to observe five minutes of memorial silence.

In my childhood in England, amid the ruined buildings left by the German bombardments of the Second World War, people tied black bands around their jacket sleeves and wore them all through the day when they attended a funeral. Mourning was not an embarrassment. In Victorian times, widows wore black “weeds” for a year, and sometimes for life. When I was in my 20s in North Beach, I’d watch brass bands parade slowly down Green Street, in front of Chinese funeral processions, the black hearse decked with flowers and photographs.

Nowadays we sometimes shrink from public mourning and from funerals. Many people choose to be cremated — no muss, no fuss.  Others leave instructions to their heirs to hold a “celebration of life” rather than a memorial, and discourage the wearing of black. In a culture embracing many religions, including consumerism, it’s sometimes hard to find a common language for the sacred. But I wonder what is being lost.

At the great turning points of life and death — as we change form and cross the thresholds of birth, marriage, adulthood and the final inevitable loss of our earthly personality and all we love — we hunger for ritual nonetheless.

That’s why I’m lighting a Yarhzeit candle for my mother that few will see, except my partner Brian and me.

In doing so I will start to turn a private ritual into a tradition. I lit my first candle in September 2010, when it eased my sorrowing heart. It brought form to the disorientation of loss, and beauty to the memory of death’s inevitable ugliness.

It helped me remember my mother’s beauty and bravery.  Six months before she died, she refused open-heart surgery. She met her death the old-fashioned way: as a spiritual ordeal rather than a technological flail.  She was not afraid to speak of dying. She told me to make sure I gave her sewing machine to someone who really sewed.  “I’m ready to die,” she said. “I’m at peace with all my children.”   I hope I learn from her example.

I can’t help thinking that if we spoke of death more directly and honored its sacredness more — rather than honoring only “the sacredness of life” and pretending that death wasn’t part of Nature or God’s plan — —  we might, make better decisions in the face of it. In the meantime, I will light my candle and honor the dead with a precious and rare resource: time in silence.