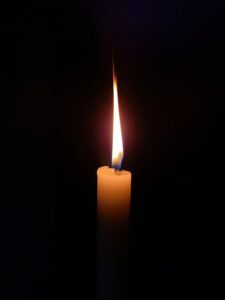 Our illusion of immortality is shattered. Let’s hope it changes us for the better.

The desire to die in the presence of those we love is so deeply ingrained that during the Civil War, soldiers dying on battlefields pulled out family photographs to create the experience in their imaginations. In 2020, the face-to-face family death vigil largely became an impossible luxury. While relatives wept on sidewalks, people with Covid died in isolation by the tens of thousands, attended only by masked nurses and aides holding iPads and dressed in hazmat suits.

Just as deeply honored, for millennia, is our unspoken promise to handle the bodies of our dead with reverence. So visceral is this obligation that in the powerful Greek tragedy “Antigone,” the heroine knowingly courts imprisonment when she ventures onto a battlefield to give her disgraced brother a proper funeral, rather than leaving his body to be “chewed up by birds and dogs and violated.” Now, during Covid surges, the dead are zipped into body bags and stacked in refrigerator trucks.

During the Great Plague of London in the mid-1600s, church bells tolled day and night, each peal announcing a single death to everyone within earshot. Today the death toll arrives quietly, in a daily email from my county health department.

The novel coronavirus is now the third-leading cause of death in the U.S. and is responsible for roughly a tenth of all American deaths in 2020. It may be a while before vaccines are widely available enough to reduce these grim statistics. Death, which once seemed tamable, hidden away in nursing homes, and pushed into the upper reaches of the lifespan, came out of the closet in 2020: contagious, capricious and striking people of every age. This is forcing a profound reckoning with the limits of free will, American exceptionalism and technological utopianism—in short, with human powerlessness in the face of death.

This is a profound surprise for many people in the U.S. and the wealthy developed world. For three-quarters of a century, deadly contagions (with the exception of polio and AIDS) had mainly been problems for another century or continent. Average lifespans for the comfortably off were lengthening. Futurists, misreading the science, wistfully imagined that ordinary people might someday live to be 120 or even 150. Alphabet Inc.’s Calico division and Oracle Corp. founder Larry Ellison sank millions of dollars into research on extending longevity. One of the stated goals of Mark Zuckerberg and Priscilla Chang’s $3 billion foundation is to “cure, prevent, or manage all diseases” by the end of the 21st century.

Our illusion of immortality, an anomaly in human history, is at least temporarily shattered. Death may always be with us in theory, but I feel its breath on my shoulder now. Until vaccination is widespread, it wouldn’t be surprising if I died within a month, and the same is true of Larry Ellison. If nothing else, we’ve been reminded that deadly microbes will always keep evolving just as we do.

This shape-shifting disease, this sickness with a thousand faces, is profoundly reshaping how we die, how we honor the dead, how we mourn and how we live. We have barely begun to reckon with its widening circles of vicarious trauma, moral distress and unacknowledged grief.

Health-care workers have witnessed an epidemic of modern death at its worst: highly technologized, plugged into machines and devoid of human touch or any sense of the sacred. People locked down in nursing homes have suffered “social death,” growing listless and even suicidal. The rest of us have suffered little deaths: of purpose, of livelihood, of certainty; of the familiar rhythms of daily life; of an unmasked smile from a barista who knows our name. At the same time, we have lost the communal rituals that traditionally help human beings cope with loss without going numb.

Usually, any major life change calls for a ceremony—a baby shower, a quinceañera, a bat mitzvah, a retirement party. A wedding ushers a single woman into a new life as a wife, just as decades later, her husband’s memorial service will acknowledge her new social role as a widow. The real miracle of ritual isn’t that water is turned into wine, but that sorrow is normalized, anxiety is transmuted into acceptance, loneliness into community and fearful self-preoccupation into an enlarged capacity to contribute to the lives of others. Reciting ancient texts in unison, we remember that our ancestors survived similar blows without losing their minds or their souls.

Gathering together indoors is now a vector for infection. We hold drive-by funerals and Zoom shivas and grieve in isolation. It’s my personal belief that our unaddressed grief is emerging not only in numbness, paralysis, denial, outrage and wishful thinking, but in skyrocketing rates of addiction, domestic violence, murder and public destruction of property.

When whole societies undergo mass trauma, public monuments and annual observances help them heal—which is very different from forgetting what happened and not being changed by it. The Vietnam Veterans Memorial created a protected space for our nation’s undone mourning. The AIDS quilt, laid on the National Mall for all to see, restored love, beauty and visibility to the hidden lives of thousands who had died of a then-stigmatized disease. Some governors have ordered flags flown at half-staff. New Jersey is planting a Covid memorial grove, with one tree for each death in the state. But we have yet to create our Covid National Day of Mourning, or hold a service at the National Cathedral, or build an American monument to the dead of this time. I have no doubt that creative new rituals are to come. Our losses cannot be fixed, but it will be easier to bear them in community.

As we become more familiar with this disease and treat it more skillfully, I hope that in the coming year we will find more space for the softer technologies of the human heart that can make dying a sacred human experience once again.

I see hopeful signs. In some hospitals, including the Cleveland Clinic, medical workers practice “The Pause,” established before the pandemic by a Virginia nurse named Jonathan Bartels. After each death, medical staff gather quietly around the body for a moment. Together they speak the patient’s name aloud, honor the life that is gone and the efforts of the medical team, and observe a few moments of silence.

Some hospitals and many nursing homes are now easing their draconian visiting restrictions. On the outskirts of New Orleans, the Heart of Hospice chain has gone further and established an inpatient hospice that accepts Covid patients and allows two family members, appropriately gowned and masked, to visit as long as they wish and even stay the night. No employees or family members are known to have contracted the disease from the unit, and the traditional family death vigil is a daily occurrence. One of the unit’s first patients was Willie Friloux, age 66, who had been languishing in isolation in a nearby hospital. “If he had died alone,” said his son Willie J. Smith, “I would have felt less than a man, less than a son, less than a human being.” Mr. Smith was with his father when he died, playing him Luther Vandross’s “Dancing with My Father” on his cellphone.

Human beings are creative and resilient. Like Civil War soldiers, we will adapt. The Virtual Funeral Collective, an association of grief counselors and academic experts, has created a guide to adaptive grief rituals for the pandemic. When an 89-year-old friend died in a glider crash, I put his photograph and flowers on a makeshift home altar, and lighted a memorial candle for him that burned for 24 hours and then went out. It wasn’t the same as gathering to tell stories and hug friends who had loved him, too, but it was comforting. On the ninth day of every month, I take part in a virtual candle-lighting Zoom service, sponsored by LetsReImagine.org. We hold up our candles to the Zoom window, take comfort from each other’s faces and candles in “gallery view,” and enter the names of those we have lost or worry about in the chat window. We often close with the late Bill Withers singing “Lean on Me.” It is the only time I have been able to weep.

My favorite modern Antigone is Tanisha Brunson-Malone, an African-American morgue technician at Hackensack University Medical Center in New Jersey. When bodies were being stacked in refrigerator trucks in a parking garage, she bought yellow daffodils and placed a single flower atop every body bag, honoring each completed life as notably as did the tolling of bells in plague-ridden London.

We will remain for the foreseeable future, masked and semi-isolated, in a world as suddenly vulnerable to pestilence as it was in 1918. This time will mark us in ways we can’t currently know. I hope we might emerge with more humility and an increased appreciation of how much we need each other.