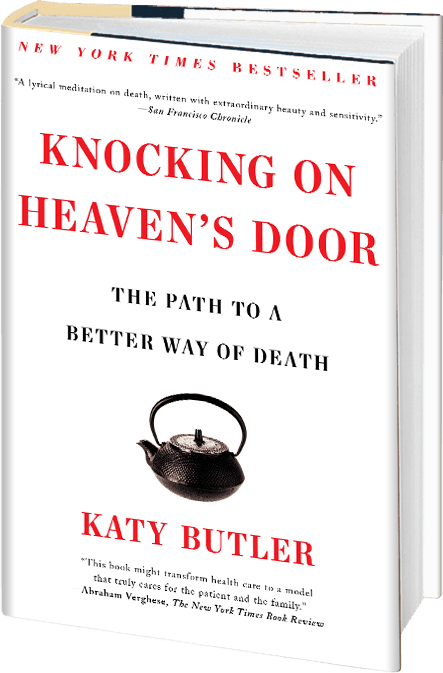 “Exquisitely present[s] her personal story and an examination of the medical profession’s handling of end-of-life care.”
—Publishers Weekly

“Knocking on Heaven’s Door” explores how medical technology’s brilliance at keeping us alive is helping us forget the spiritual technology of the Good Death.

Based on an acclaimed New York Times magazine piece, this exquisite memoir and groundbreaking exposé of modern medicine will change the national conversation about the end of life. Like millions of Americans caring for aging parents, award-winning science writer Katy Butler assumed that her beloved mother and father would meet death on their own terms, free from medical overdoing.  She was wrong.After doctors refused to disable the pacemaker that helped her 84-year-old father’s heart to outlive his brain, she set out to understand why medicine, which saved his life as a young man, did little at the end but prolong his worst years.  Her quest had barely begun when her mother rebelled against her doctors, refused open-heart surgery, and insisted on meeting death the old fashioned way: head-on.  Knocking on Heaven’s Door is the fruit of the family’s journey, and a map through the labyrinth that modern dying has become.With a poet’s eye, a daughter’s love, and an investigative reporter’s skill, Butler lays bare the wrenching moral choices we face when the ancient reality of death collides with the technological imperatives of modern medicine. Starting with the mid-20th-century inventors of lifesaving devices like the pacemaker, she chronicles our astonishingly successful war on sudden death and its aftermath: a tangled marriage of technology, medicine and commerce that has created some of the most painful, expensive, and prolonged ways of dying known to human history.Caring for declining parents is a reality facing millions who may someday tell a doctor an oddly loving thing:  “Let my parent go.”  This revolutionary blend of memoir and investigative reporting points the way to a new art of dying for our biotechnical age.  Like Jessica Mitford’s The American Way of Death and Sherwin Nuland’s How We Die,  it is sure to change the national conversation.

““Knocking on Heaven’s Door” is a thoroughly researched and compelling mix of personal narrative and hard-nosed reporting that captures just how flawed care at the end of life has become. My hope is that this book might goad the public into pressuring their elected representatives to further transform health care from its present crisis-driven, reimbursement-driven model to one that truly cares for the patient and the family. And since life is, after all, a fatal illness and none of us are spared, there is an urgent need for us in America to reclaim death from medicine and, whenever possible, enable the ritual of dying at home with family present (and aided by all medicine can offer) so that we are allowed to take our leave from earth with dignity.” – Abraham Verghese, See Full Review from The New York Times

“‘Knocking on Heaven’s Door’ is more than just a guide to dying, or a personal story of a difficult death: it is a lyrical meditation written with extraordinary beauty and sensitivity. ” – Zoe Fitzgerald Carter, The SF Chronicle 9/21/13

Excerpt published in the Wall Street Journal: The Ultimate End-of-Life Plan – How one woman fought the medical establishment and avoided what most Americans fear: prolonged, plugged-in suffering

“Two things make this blistering book stand out: the first is a dead-honest personal story that doesn’t attempt to hide the anger, denial, and even cowardice of family members as they cope with the unimaginable … The other is the implacable insistence on life at any cost that drives the medical establishment into creating the worst kind of death possible.”– Betsy Burton, The King’s English Bookshop, American Booksellers Association

“With candidness and reverence, Butler examines one of the most challenging questions a child may face: how to let a parent die with dignity and integrity when the body has stopped functioning.” – See Full Review from Kirkus Reviews

“In this eloquent exegesis on taking control of the end of one’s life, Butler defines a “good death” as one that is free from unnecessary medical intervention and faced with acceptance and dignity.” – See Full Starred Review from Publisher’s Weekly

“Riveting, poetic, and important, this book will challenge and nourish you.  I am deeply grateful for its truth, wisdom, and gorgeous stories, some heartbreaking, some life-giving, some both at the same time.” – Anne Lamott

“This is a book so honest, so perceptive and so achingly beautiful that its poetic essence transcends even the anguished story that it tells. Katy Butler’s astute intellect has probed deeply, and seen into the many troubling aspects of our nation’s inability to deal with the reality of dying in the 21st century: emotional, spiritual, medical, financial, social, historical and even political. And yet, though such valuable insights are presented with a journalist’s clear eye, they are so skillfully woven into the narrative of her beloved parents’ deaths that every sentence seems to come from the very wellspring of the human spirit that is in her. This elegiac volume is required reading for every American adult; it has about it a sense of the universal.” – Dr. Sherwin B. Nuland, author of How We Die: Reflections of Life’s Final Chapter

“Katy Butler’s science background and her gift for metaphor make her a wonderfully engaging storyteller, even as she depicts one of our saddest but most common experiences: that of a slow death in an American hospital. Knocking on Heaven’s Door is a terrible, beautiful book that offers the information we need to navigate the complicated world of procedure and technology-driven health care. I’m recommending it to all my friends with aging parents or partners, and holding on to a copy for myself.” – Mary Pipher, author of Reviving Ophelia and Seeking Peace: Chronicles of the Worst Buddhist in the World

“Katy Butler’s new book—brave, frank, poignant, and loving—will encourage the conversation we, as a society, desperately need to have about better ways of dying. From her own closely-examined personal experience, she fearlessly poses the difficult questions that sooner or later will face us all.” – Adam Hochschild, author of King Leopold’s Ghost and To End All Wars

“Intimate and wise, heartbreakingly compassionate, and critically helpful, this is a truly important work that I hope will be widely read. We have lost our way and Katy Butler’s impeccably researched and powerful tale will help eliminate much suffering on the passage to the mystery of death.” – Dr. Jack Kornfield, author of A Path with Heart

“Knocking On Heaven’s Door is a disquieting book, and an urgent one. Against a confounding bioethical landscape, Katy Butler traces the odyssey of her parents’ final years with honesty and compassion. She does a great service here, skillfully illuminating issues most of us are destined to face sooner or later. I cannot imagine a finer way to honor the memory of one’s parents than in such a beautifully rendered account.” – Alexandra Styron, author of Reading My Father

“This is the most important book you and I can read. It is not just about dying, it is about life, our political and medical system, and how to face and address the profound ethical and personal issues that we encounter as we care for those facing dying and death. You will not be able to put this book down. Its tenderness, beauty, and heart-breaking honesty matches the stunning data on dying in the West. A splendid and compassionate endeavor.” – Joan Halifax, PhD, Founding Abbot, Upaya Institute/Zen Center and Director, Project on Being with Dying: Cultivating Compassion and Fearlessness in the Presence of Death

“…an unflinching look at dying in all its complexity. …shimmer[s] with grace, lucid intelligence, and solace.  – Lindsey Crittenden, Spirituality & Health, August 2013

“This braid of a book – memoir, exposé, spiritual guide – forensically examines the battle between death and the imperatives of modern medicine. After Katy Butler’s father had a stroke in 2001, a cardiologist put in a pacemaker, which kept his heart thumping after his mind and body failed. Her 84-year-old mother was crushed by six years of constant caretaking – joining some 66 million Americans, mostly women, in the same situation. Impeccably reported, Knocking on Heaven’s Door (Simon & Schuster) grapples with how we need to protect our loved ones, and ourselves, now that our technology has outpaced our humanity.” – K.D., More Magazine, Sept. 2013

“In this unflinching look at America’s tendency to overtreat, journalist Katy Butler recounts her father’s slow decline after a debilitating stroke and her mother’s refusal to succumb to Hail Mary surgeries as a window on the “perverse economic incentives” that reward doctors for procedures over care. In the process, she makes a strong case for the “slow medicine” movement, which recognizes that “dying can be postponed, but aging cannot be cured”.” – Zaineb Mohammed, Mother Jones Magazine, Sept/Oct 2013

“Butler argues persuasively for a major cultural shift in how we understand death and dying, medicine and healing. At the same time, she lays her heart bare, making this much more than ideological diatribe. Readers…should be sure to pick up this book. It is one we will be talking about for years to come.” – BookPage

““Knocking on Heaven’s Door’’ will help those many of us who have tended or will tend dying parents to accept the beauty of our imperfect caregiving.” – Dr. Suzanne Koven, The Boston Globe

“Part family memoir, part clear-eyed reporting on end-of-life care in the United States, Butler’s beautifully written book is an essential read for all Americans, but especially for baby boomers heading into an age where they will deal with these medical issues.” – Joanna Connors, Cleveland.com